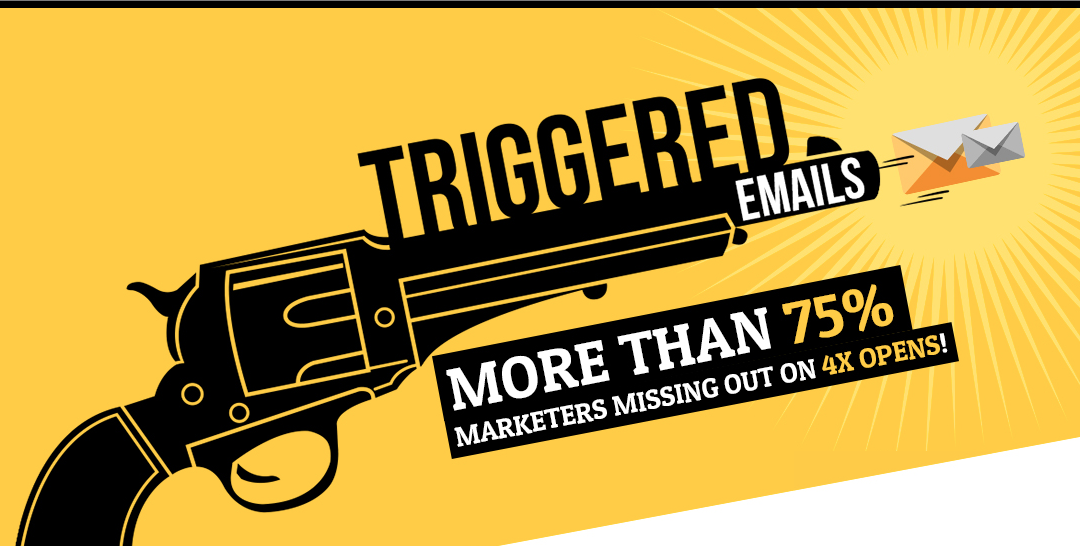 We’re absolutely sure that you check your inbox every morning, but now we don’t want you to wait. Open it right now and look at the titles. How many of them have a general title and how many are call to actions or they’re addressing you by the first name? If you can split them in these two categories, congratulations! Now you know the difference between traditional email marketing and triggered emails.

To make things clearer, a traditional email is a message which in most  cases uses static HTML with simple tags for recipient-specific information, which gets merged with customers lists, being often sent by an email service provider, also known as ESP.

On the other side, a triggered email is HTML generated and combines a custom template with user data around a specific event. It’s sent directly through backend system or using an ESP via API integration.

Ok, we’re all good now. Let’s move to the next point, shall we?

Back in 2008, a study made by Practical Ecommerce was saying that “trigger marketing is the next step for the critical e-commerce function of automated email communications”.  After 7 years triggered email marketing is something we’re dealing with every day, with more and more marketers using it instead of the traditional way.

Now, in case you’re wondering why triggered email campaigns are used so often nowadays, we have some numbers that will explain this as clear as possible.

First of all, it’s the click-through rate. Compared with traditional, triggered emails’ rate is 152% higher. Pretty impressive, right? Not to mention that by using them, you have the possibility to add dynamic offers or customized messages within the content.

Moving on, there’s the open rate, which is 4 times bigger (almost 73%, to be more specific) than traditional emails. Besides this, you can save time and reduce stress, some aspects which we also consider very important.

Finally, by using transactional emails, as they are also called, you have all the chances to achieve high deliverability and scalability, alongside engaging users with more information or cross and up selling.

We’ve gone through the advantages of using these triggered messages, but like almost everything in this world, they have some disadvantages. We’re talking about implementing the whole program, which can be costly, even though it’s done just once.

Then, there’s the part where you need to create the right rules and programs, identifying the events on which triggered campaigns need to be set and finally, managing and syncing the data from all your sources. Still, if you take a look at the above-presented numbers, it’s worth the effort, right?

Of course, after picking the type of email, you will use, a very important aspect you should consider is the devices used for reading the message you’re trying to transmit. According to a report from MovableInk, 66% of all email in the United States is now opened or read on smartphones or tablets, so pay a lot of attention to your titles for the beginning. It should contain  all the essential details and be organized in such way that even a user with a 4” smartphone will be tempted to open it and see what you’re transmitting.

Last but not least, let’s watch this from a client’s point of view. It’s obvious that everybody will be more tempted to open and read a triggered email, which makes him or her want to know more about the topic. On the other hand, let’s be honest: how many of those emails with a generic, bulk-like title do you even look at? What’s that? Somebody said ‘none’? Why aren’t we surprised?

To sum up, we’re going to say this once again: there are a lot of situations in which triggered emails managed to deliver impressive results, so if you’re not using them already, you should do it as quick as possible! Sign up with Retargeting using the button below!